There are only two of these Murano glass masterpieces crafted by Pino Signoretto. One is owned by a European and the other by an Indonesian businessman.

For enquiries and private viewing …

The Irony of Philippine Politics: Marcos Family vs Binay Family

Places I Hate In Indonesia

So this is where I live for the past decade. 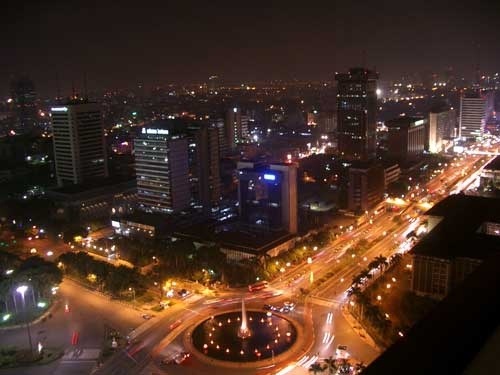 And at dusk my view from my old office was this

END_OF_DOCUMENT_TOKEN_TO_BE_REPLACED

Why fugitive Janet Napoles was received by no less than the President himself is beyond me. 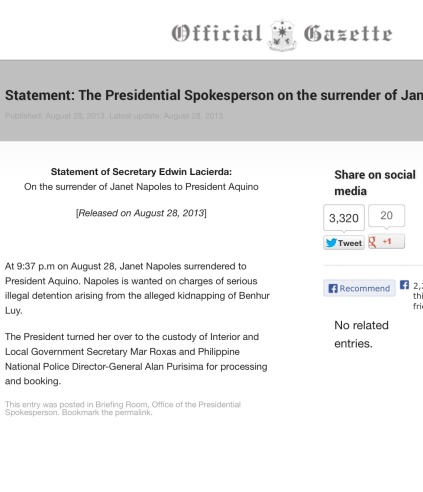 END_OF_DOCUMENT_TOKEN_TO_BE_REPLACED

The picture here is from The Thinking Class of the Philippines Facebook Page and we are reposting it here to spread the word and the show the horrific gall of Sen. Ramon “Bong” Revilla, Jr., former movie actor and currently a shameless Senator in the Republic of the Philippines who is involved in the pork barrel scandal in the Philippines.

To add serious insult to an infected wound, Sen Bong Revilla’s questions the very signature he signed on the release of Pork Barrel fund to questionable NGOs headed by fugitive Janet Napoles as reported by Commission on Audit.

END_OF_DOCUMENT_TOKEN_TO_BE_REPLACED

Stormy Weather: The Wrath of Maring

Manila was brought down to its knees yet again with torrential rains that submerged some areas in waist-deep floodwaters and making streets impassable to vehicles, while thousands of people in northern regions fled to emergency shelters. Annually, the Philippine archipelago is visited by 20 tropical cyclones in a year, making it one of the most storm-battered countries in the world.

Here are some of the pictures available on the net and collated for your reference.

END_OF_DOCUMENT_TOKEN_TO_BE_REPLACED

In light of the recent posting I made — culled from the net, of course — of the eerie similarity of two famous personalities:

END_OF_DOCUMENT_TOKEN_TO_BE_REPLACED

Young kids will always be just that … Young and kids. But to age gracefully requires dedication and discipline, with inner beauty emanating from within, glowing, radiating, and infecting.

It’s easy to spot worn-out kids with their zits and boogers, pretending to be adults, but as immature as their … well, do the math.

Here are some celebrities that can teach kids a whole of things or two.

END_OF_DOCUMENT_TOKEN_TO_BE_REPLACED

WHY: The Most Important Question on Posting in Facebook

Instincts honed from a lifetime of interacting with people can help guide you to Facebook success. You should be able to talk to anyone, engage anyone, anytime, anywhere.

It’s said that in basketball, if you can play, you can stay.

Rings true for any bar in any part of the world.

But you should also incorporate a handful of key characteristics shared by the most effective business posts.

A successful Facebook post for your business shares a lot with successful personal posts — only more appropriate for “general audiences” and more focused on a specific result.  END_OF_DOCUMENT_TOKEN_TO_BE_REPLACED

The Philippine Telco Wars: How Globe Continues To Screw Up Because Of Its PR Department

Undoubtedly the fiercest, most feared, but highly respected professor, economist, and media personality in the entire Republic of the Philippines, has this to say about Globe Telecommunications awful customer services.

Sequel to ‘A (common?) horror story’

On Dec. 29, 2012, my column, which the editors titled “A (common?) horror story,” described the travails of my daughter Tami as she tried to replace her lost Globe phone, and my travails as I tried to help her. The Reader may recall that I began the column by expressing hope that I would be narrating a horror story with a happy ending—an all’s-well-that-ends-well type.  But it did not come to pass, as I lamented, because Globe had once again reneged on its promise that Tami would have her phone by Dec. 27 at 2 p.m.  (I wrote and sent the column on the afternoon of Dec. 28). END_OF_DOCUMENT_TOKEN_TO_BE_REPLACED